I’m very determined and goal-oriented. My goals change periodically, and I think that’s okay. I’m learning about myself every step of the way. It would be foolish to cling to a dream I no longer look forward to. Thus, I am learning and shuffling my life around to make room for things, people, and plans that enchant me.

And then I’m confronted with my culture.
My culture that doesn’t force me to do anything, but whose participants are constantly asking the same questions and are worried about the same things. I know that those who love me wish the very best for me. I have been blessed beyond measure with family and friends who are so supportive, caring, and inspirational. But even these very special people in my life are sometimes caught up in our culture – the one that doesn’t intentionally want to cause me harm, but it’s doing so anyway.

“When are you getting married? So and so is…so and so had a baby…Why not?”

At first, I laughed it all off. I’d answer with truth and they’d be concerned. But I’d laugh because I didn’t know what else to do, and because to me, it all seemed obnoxious and ridiculous. To me, it still feels like a question I shouldn’t be asked more than 20 times a month, because I’m young and free and that’s just how I like it. My relationship doesn’t have to be heading in the “I do” direction, because it’s in a great place as it is. Besides, that’s my business. It’s my life and I am allowed to do what I want.

They understand that. They wouldn’t force me to do anything, but their constant nudging and questioning is finally getting to me, but not in the way they want it to get to me.

And I’m not changing my mind about what I want, just because other people ask me questions. That would not be honest to my own self. I am holding tight onto what I want and where I’m going. I ask them to stop – and it’s not stopping. Well, I’m not stopping either.

Freedom isn’t about being reckless or heartless.
Freedom is letting go of everything that weighs heavy on your soul.
Freedom is opening your eyes to new experiences and ways of knowing.
Freedom is about not allowing failure or struggle to discourage you.
Freedom is being comfortable with your own thoughts, with your actions, with you.

Freedom is the ability to find happiness in a broken world. 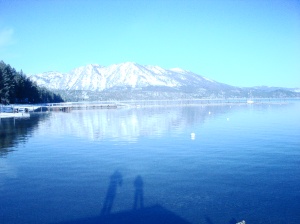 Lake Tahoe after the sunrise.

The three things were going through my mind as I sat in a Starbucks, sipping my soy chai latte. I tried to read something or other on moral philosophy, but I could not concentrate. This is what happened:

The place is packed. Students are everywhere. Up in the loft area, there is one power outlet. Everyone twitches every time somebody in the general area of the Outlet moves, hoping that they are leaving. As soon as someone gets up, some other desperate coffee addict appears. The power outlet is calling us all by name, as our “low battery” notifications flicker.

The bell-tower rings. I’m still holding my spot in the general area and my charger is plugged in. I am lucky. The nice old man sitting behind the table in the corner, the table right in front of the Outlet, gets up, smiles, and says goodbye. Everyone is glaring. Little do they know, trouble is on its way.

A man dressed in tan corduroys, a light blue colored button down shirt, and polished dress shoes quickly appears. He’s wearing black glasses, because obviously the sun’s rays are overwhelming inside the dimmed coffee shop. Ridiculous. He also has a long board or a skate board, some kind of board.
Odd, but that’s besides the point.

He sits down. He did not purchase a drink or have a backpack. He sits down and a girl hurries over from a different table asking if he wouldn’t mind switching seats with her. But he says, “I was sitting on the couch for a long time and I have been waiting for this seat.” The girl, disappointed, says okay and leaves.

The man, maybe in his early thirties, takes out his phone and its charger. Everyone’s relieved that he is taking advantage of the best seat in the house. In the corner, by himself, he starts messing with his phone.

I’m not even going to elaborate on my disgust with porn in general. I’m just commenting on this man watching it in a crowded public place at 2:00 P.M. As a feminist, I was offended. I am still offended. I wanted to throw things at him. I wanted to confront him. I wanted to tell him to get the fuck out. There were kids in that room. He was lucky none of their parents or tutors were sitting where I was. I wanted to yell at him and tell him that his behavior was disrespectful and unacceptable. Maybe, scumbag, you don’t share my values or beliefs or whatever, but your actions are not okay.

But I didn’t say anything. I wish I had said something. I just shot dirty looks and he definitely saw them. He tried to hide his screen more. So he turned his chair and was facing me. I put on my over-sized sweater. He noticed my dirty looks. He left.

I don’t really care what people say about male sexuality. I don’t really care about any of it.
We live in a civilized world. People can control their desire to eat (which is something totally necessary for  health and survival). You can control your obsession with sex. And if you find it too dificult, there are treatment centers for that. Use them.

The world is a shared space. You may find corners in which you think you’re totally alone, but the truth of the matter is, your actions and you are never truly hidden. Your actions affect other people.